Tonight we take a look at Nick Leddy's season.

Thanks Jen for our visual aides. 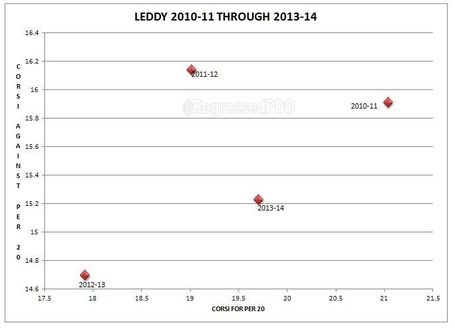 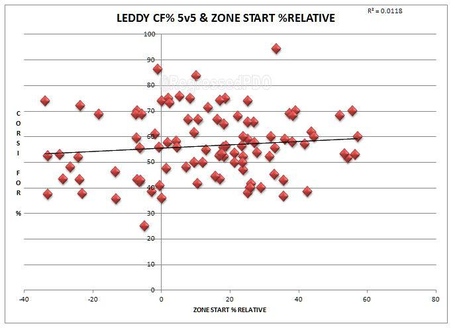 I think Nick Leddy had his best season as a professional in 2013-14 and it could be argued that he was one of the most important defensemen on the team.  The revolving door that was the Blackhawks' third paring was well documented but the one constant was Leddy.  While Leddy played his best hockey in the regular season, the playoffs were not too kind to him.  For whatever reasons, Leddy seems to find himself in Q's doghouse every spring.  This year he found himself a healthy scratch in Game 3 of series against the Minnesota Wild after playing in all 82 regular season games.  The season didn't end well as a turnover in his own end followed by the puck deflected off him on the season ending goal left a bad taste in many mouths. The combination of these things has led to some rumors about Leddy getting moved in the offseason.  I don't think this will happen.  Leddy is a Bowman guy and he is the quintessential defenseman for Q's offensive system.    As proven by the numbers provided by Jen, Leddy is the best defenseman at zone entries.  If anyone from the defensive core is getting moved this summer it will be Johnny Oduya, who is older and makes more money.  I really would like to see  Leddy get a shot quarterbacking the top power play unit.  Funny, it seems like I have written that many times before.  He has a very good shot that he doesn't use enough.  I would like to see what he could do with the likes of Jonathan Toews and Patrick Kane on the ice.  Leddy really improved in his own end and when he did make mistakes in the neutral zone he used his great speed and skating ability to recover.  He is still just 23 years old and has 3 ½ years of pro experience under his belt.  Duncan Keith was 22 when he made his NHL.  He is still way too young to be shipping out of town.

Leddy played the entire season with a rotating stable of partners. Despite this, he was a terror through the neutral zone showcasing the wheels that make him the best puckmover outside of Patrick Kane. He's grown into a bit more of a board winner as he continues to add strength to his frame. But these were baby steps, in his 2+ years with the Blackhawks he hasn't taken that gigantic step forward that we have expected. He hasn't asserted control quarterbacking a power play unit that desperately needs it. He's not a guy that Q trusts in his own zone or late in crucial games, At 23, he still has oodles of time to figure it out. Will this be with the Blackhawks? Different conversation.

Everybody's favorite mouth-breathing defenseman took another step forward in his 4th season with the Blackhawks, despite playing without a consistent defense partner. Nick Leddy spent most of his season playing alongside one of Michal Rozsival or Sheldon Brookbank, occasionally a different one each game. The Blackhawks generated 9.5 percent more Corsi events when Nick Leddy was on the ice with Michal Rozsival than when Leddy was on the ice with Sheldon Brookbank, according to www.hockeyanalysis.com. Leddy's Corsi For percentage has increased in general from year-to-year, from 53.2 in 2011-2012, to 55 last season to 57.1 this year, according to www.extraskater.com. His Corsi Rel this year was second-highest on the team, Michal Rozsival's being the highest. His good possession numbers could be partly attributed to the quality of competition he faces, lowest on the team among defensemen. However, playing well against bad competition is still playing well. It'll be interesting to see how he adjusts with a presumably top-four role next season.
His season was pretty good beyond the numbers, as well. He cut down on egregious mistakes compared to years past. He gave the puck away 35 times in the regular season, a career low despite the highest possession numbers of his career. The times he did make them, he was often able to bail himself out, which was something he wouldn't have done not too long ago. It would also be remiss to review Leddy's season without mentioning his zone entry prowess. The man was a one-man trap-buster against the Wild and a zone entry force throughout most of the playoffs, according to Jen's entry tracking.