Johnny Oduya quietly played one of the toughest seasons of any NHL defenseman this season. Blackhawks coach Joel Quenneville used Oduya and his defense partner, Niklas Hjalmarsson, as the shutdown pairing. While many still think of Duncan Keith and Brent Seabrook as the number 1 defense pairing for Chicago, that label is a bit misleading. While Keith and Seabrook did face some tough competition, they were used in ways to optimize their offensive prowess. They had the benefit of more optimal zone starts (i.e. less defensive zone starts) and significant time on the ice with the first line of Jonathan Toews, Marian Hossa and Patrick Sharp.

Oduya and Hjalmarsson took the heavier burden in terms of defensive zone starts (-9.5% and -10.2% ZS% Relative to their teammates). The pairing also faced the toughest competition of the defensemen on the team. Oduya faced 29.7% QoC (Quality of Competition) which was good for 6th in the league among defensemen who appeared in at least 62 games. Hjalmarsson ranked 5th at 29.8%. The only other defensemen facing tougher QoC were Dion Phaneuf (TOR), Carl Gunnarsson (TOR since traded to STL), Zdeno Chara (BOS) and Oliver Ekman-Larsson (PHX). 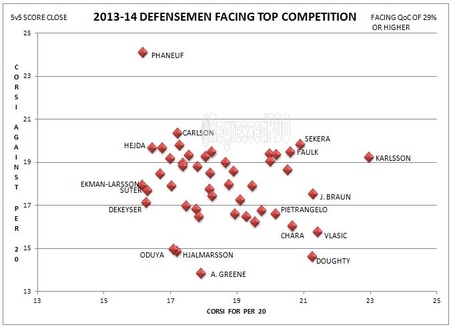 In facing the tough task of playing against the opponent's top lines and starting out of the defensive zone more often, one would expect that Oduya's possession numbers would not be very impressive. To the contrary, they were impressive. Oduya ranked 14th in the league in Corsi Against Per 20 (CA20) among defensemen playing at least 200 minutes at 5v5 Score Close. For a little context, 8 of the players ahead of him played for the New Jersey Devils, who are a very low event hockey team. When we look at Oduya's numbers from a Fenwick perspective, we find he ranked 10th in the league in Fenwick Against Per 20 (FA20) with the players ahead of him split between the Devils, LA Kings and Blackhawks. 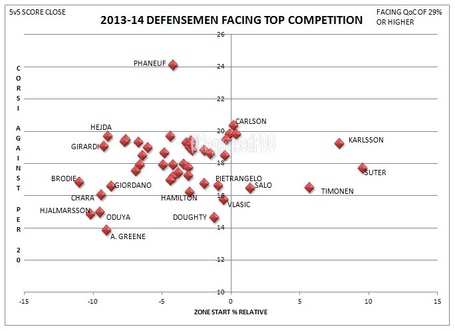 Oduya and Hjalmarsson pulled off some of the toughest zone starts relative to their teammates of the defensemen in the league facing the toughest competition. The really impressive thing about that is that they have suppressed their opponents' shots very well. Only Andy Greene of the Devils has shown better shot suppression among this group of defensemen in comparable relative zone starts. Drew Doughty of the LA Kings is the only other defensemen in the same category of shot suppression but with less difficult zone starts relative to his teammates. 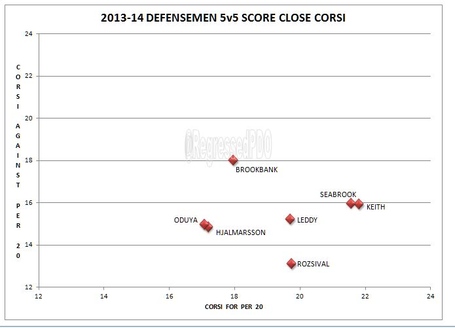 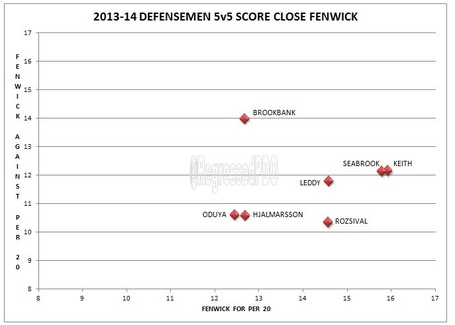 In terms of his teammates, Oduya's usage is evident from the two graphs above. Seabrook and Keith are involved more heavily in generating shots. Leddy is stuck in the middle of his two regular partners on defense. Leddy, Rozsival and Brookbank had the most offensive and neutral zone start percentages combined and played against easier competition than the other defensive pairings. Oduya moved the puck out of the defensive zone well despite he and Hjalmarsson being on the lower end of generating shots for the team. 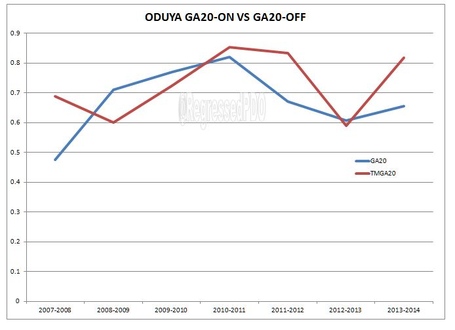 The graph above shows Oduya's numbers for Goals Against per 20 (blue line) and the Goals Against per 20 for his team when he is not on the ice (red line). The first few seasons are with the Devils, then in February of 2010 Oduya went to the Atlanta Thrashers/Winnipeg Jets and finally in February of 2012, landed in Chicago. This season, the GA20 rate was significantly lower when Oduya was on the ice as opposed to the team rate. 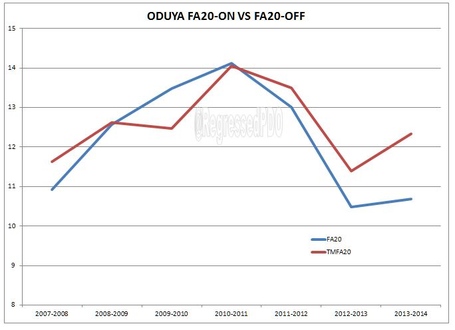 This graph is set up the same way as the last, but shows Fenwick Against per 20 (FA20) for Oduya (blue line) and the team rate of FA20 when he is not on the ice (red line). Again, Oduya's FA20 rate was better than the team rate suggesting he and Hjalmarsson did a better job of suppressing their opponent's shots (Fenwick = SOG + missed shots). 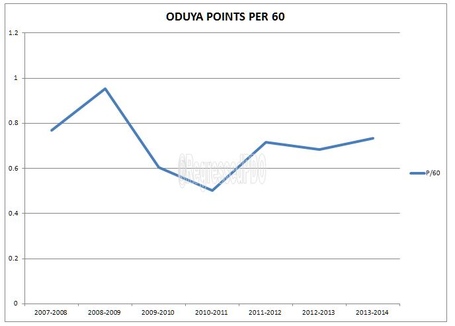 Oduya is not a big goal producer, but his Points Per 60 (P/60) rate has stayed fairly consistent since coming to Chicago.

This season, Oduya also logged heavy minutes on the Penalty Kill for the Blackhawks. The team used Oduya and Hjalmarsson for the heavier zone starts, although on the PK, that is a very relative term. Seabrook and Keith had a little bit more favorable zone starts in order to spur possession to move into the opponent's zone. 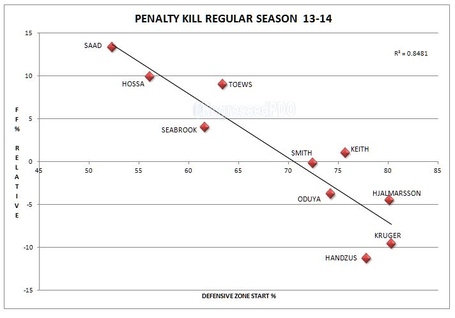 The graph above shows the player's Fenwick For Percentage Relative to his teammates along with the player's defensive zone start percentage while on the Penalty Kill. The correlation between the two metrics is quite strong, so it is expected that Oduya would not be driving shots the other way while holding down the heavier penalty killing responsibilities. 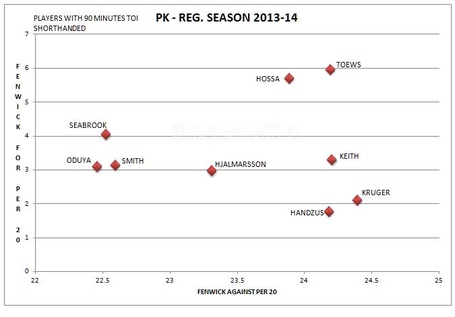 Despite the heavy zone starts on the PK, Oduya had the best FA20 rate of the penalty killers, meaning the lowest shots against (unblocked) rate.

Throughout the season, Oduya was asked to play a very difficult and unglamorous role for the Blackhawks. Essentially, he had to do a lot of the dirty work without getting all of the glory that comes to the high scoring defensemen like Seabrook and Norris Trophy Winner Keith. His reliability and consistency against the toughest competition allowed the Blackhawks to maximize the offensive talents of the other defensemen and execute the game plan that brought them within one goal of another Stanley Cup Final appearance.

*data used herein was collected from: