Jen tackles one of the most discussed Blackhawks of the 2013-14 season.

Bryan Bickell's new contract was the source of many a hot take around the league during the regular season. With 11 goals and 4 assists in 59 games, many felt the left winger had been grossly overpaid based upon a good run in the playoffs the season prior. When the playoffs came around, Bickell scored 7 goals and had 3 assists in 19 games and all the uproar over his contract settled down again. Whether you like Bickell's contract or not, his season was cut short by injury and frankly, was not as bad as his 15 points would suggest. (*click to view larger image) 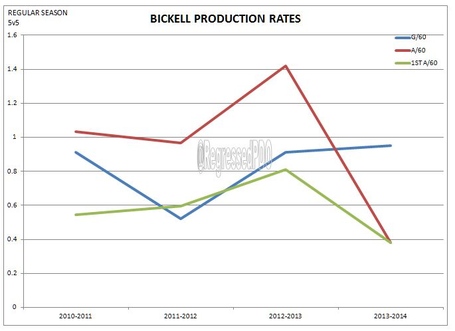 Bickell's goal production rate, G/60 (Goals Per 60), actually rose a bit this season to 0.950 from last season's mark of 0.912. What this means is that Bickell was scoring goals more frequently at 5v5 than he did last season. This is only a regular season measure so it is not skewed by his elevated scoring rate in the playoffs. 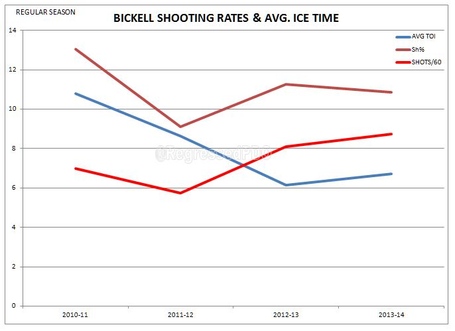 Bickell's average time on ice during the regular season (AVG TOI) ticked up a little bit from last season. His TOI is still fairly low though at 6.7 minutes of 5v5 ice time per game. Bickell missed games due to injury and was scratched several times to "send a message" that Coach Joel Quenneville wanted to "see more" from him. I explored this a bit in two articles this season. The first was midway through the season that you can find here. The second was as the playoffs started and it makes a good companion to this article for more information on Bickell's season.

Bickell's shooting percentage (sh%) this season at 5v5 was 10.87%, which is consistent with his past performance. His shot rate (Shots/60) went up from 8.108 last season to 8.736 in 2013-14. So at least from a shooting perspective for Bickell himself, a cause for his point production woes this season is not immediately apparent.

The mystery to what went wrong for Bickell this season reveals itself when we look at his A/60 (Assist Per 60). After hovering around 1.000 A/60 over the previous three seasons, including a career high of 1.419 in 2012-2013, Bickell's Assist rate plummeted to 0.380 this season. In addition, his 1st Assist rate was equal to his Assist rate for the first time in his career. This is particularly interesting because with another competent linemate and offensively inclined defensemen, one would think that his passes would lead to more secondary assists off of the shots of the other players.

Why did Bickell's A/60 fall so much? Did he suddenly forget how to get the puck to his teammates? These are important questions. Thankfully, we do not have to go through the season shift by shift to see what happened. There are some statistical measures that will help us figure out the answer to this mystery. 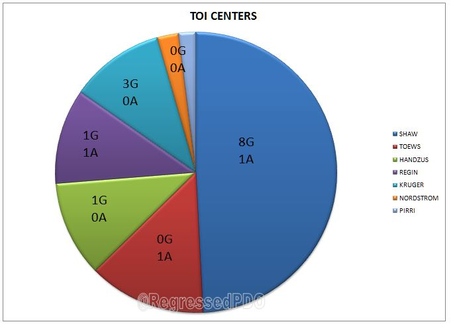 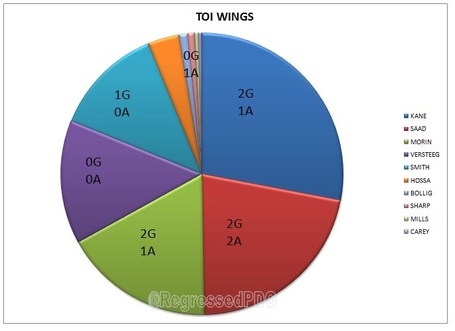 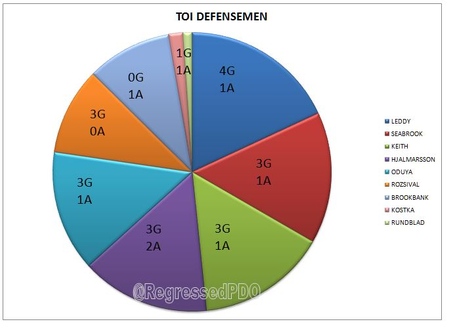 Bickell spent about half of his ice time in the regular season with Andrew Shaw as his center. The rest of the time was split among several different centers. The other wing on his line was more of a hodgepodge, but Patrick Kane, Brandon Saad, Jeremy Morin, Kris Versteeg and Ben Smith account for most of the time. Nick Leddy was the defenseman most frequently on the ice with Bickell. 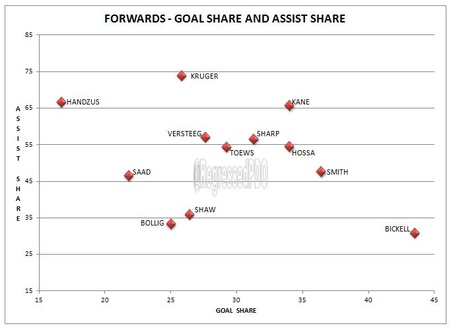 Goal Share is a measure of the percentage of goals scored by a player when he is on the ice. Hypothetical Example: Bickell, Shaw and Saad score 10 goals while on the ice together throughout the season. Bickell had 5 of those goals, Shaw had 1 of the goals and Saad had 4 of the goals. Their Goal Shares would be: Bickell 50%, Shaw 10% and Saad 40%. Assist Share is calculated in the same manner.

During the 2013-14 regular season, Bickell's Goal Share was 43.5%. This was the highest GShr on the team for forwards and defensemen. The player with the second highest GShr was Ben Smith at 36.4%, so as you can see Bickell's GShr was higher than all of the players by a fairly wide margin. Bickell's AShr (Assist Share) was the lowest of all of the forwards on the team and in fact the only players at any position with a lower AShr on the team were defensemen Michal Rozsival, Johnny Oduya and Sheldon Brookbank.

Where this gets really interesting is when we look at the AShr of the centers on the team. Marcus Kruger, Jonathan Toews and yes, even Michal Handzus all had AShr of over 50%. Bickell's center for over half of his ice time during the regular season was Andrew Shaw. Shaw's AShr was only 35.9%. Among the players in the NHL listed as a center and having played at least 41 games during the season, Shaw's AShr ranked him 152nd out of 162 players. As a playmaker, a center is expected to have a far better AShr than what Shaw was able to put up this season. This may perhaps be a sign that Shaw is more suited to playing on the wing, which becomes easier to do now that the players available to the Blackhawks at center are greater in number. 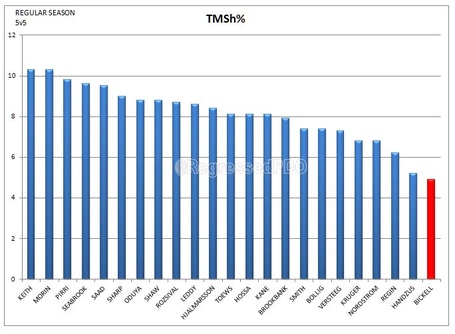 Another piece to this puzzle is apparent when TMSh% is examined. TMSh% is the shooting percentage of a player's teammates when they are on the ice with him. Duncan Keith and Jeremy Morin led the team with their teammates shooting 10.3% while they were on the ice. While Bryan Bickell was on the ice, his teammates shot a paltry 4.9%, good for last on the team. 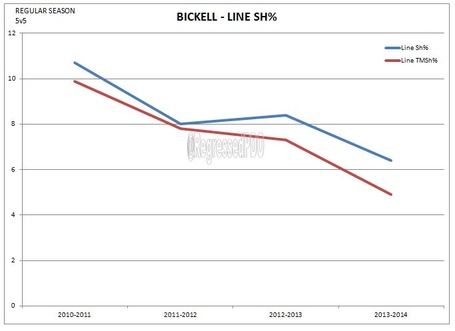 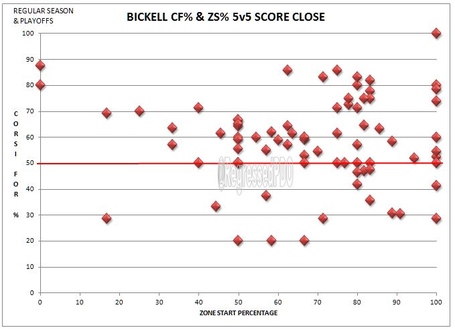 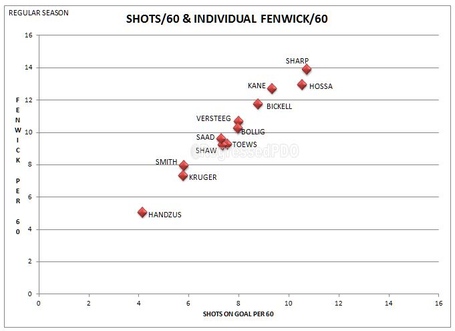 Overall, Bickell had a very strong season in terms of puck possession, a consistent season in terms of goal scoring rates and a rough time from an assists and line production standpoint. He struggled with being as physical as the team wanted him to be while recovering from his knee injuries that occurred near the end of the playoffs in the 2012-13. He also injured one of his knees in November and upon returning was wearing braces on both knees. These braces had an obvious effect on his skating for a while, but he seems to have made strides toward recovery. Despite having had off-season wrist surgery, his shooting did not seem to be negatively affected.

While he will likely not be a big goal producer during his career in the regular season, paired with linemates that drive possession a bit more, Bickell has shown to be an excellent playoff performer. Perhaps next season will hold something different for him particularly in regard to ice time as he has shown in the past that he performs better with higher ice time.

I would give Bickell a grade on the season of A. Factoring in the struggles he had during the regular season, I am sympathetic to his situation. Knowing that others likely do not share my sympathy in this regard, I am sure many will disagree; however, I have a tough time judging a player's performance in terms of a new contract given to him when his goal production remained consistent with his career numbers and his possession metrics were really quite exceptional. As I've explained in my previous articles analyzing Bickell's performance, all signs point to his struggles this season being the product of multiple factors the majority of which were beyond his control. I think we can be optimistic that with some minor changes in his usage, these struggles will be a thing of the past.