An in depth look at the season of Brand Saad.

In his second season with the team full time, Brandon Saad again impressed the league. He will enter this coming season on the final year of his Entry Level Contract (ELC) and become a Restricted Free Agent at the end of the season. Given his promise and his past performance, I think we are safe to assume he will be signed by the Blackhawks.

Saad had a P/60 (Points Per 60 minutes) rate of 2.171 in 46 games for the Blackhawks last season. This season his P/60 was 1.909 in 78 games during the regular season. There are a few reasons for this. First, the season was shortened due to the lockout so there was a shorter time to sustain a relatively high P/60. Second, during the 2012-13 season, Saad spent most of his time on a line with Jonathan Toews and Marian Hossa. I'm sure this is not news to you, but they are fairly good at scoring. Third, during the 2013-14 season, Saad spent his time with a number of different linemates including Andrew Shaw, Patrick Kane, Jonathan Toews, Brandon Pirri, Kris Versteeg, Bryan Bickell and Michal Handzus.

His 1.909 P/60 is still very respectable. It places him 88th in the league at 5v5 (among forwards with at least 500 minutes of TOI) and is comparable to the rates of Ryan O'Reilly (COL), Reilly Smith (BOS), David Perron (EDM) and James van Riemsdyk (TOR) this season. On the season, his points pace ranked him above Jeff Carter (LAK), Henrik and Daniel Sedin (VAN), Rick Nash (NYR), Evander Kane (WPG), Vladimir Sobotka (STL), Valeri Nichushkin (DAL), Alex Ovechkin (WSH), Zach Parise (MIN) and many others.

(please click on graphs and charts to view a larger image) 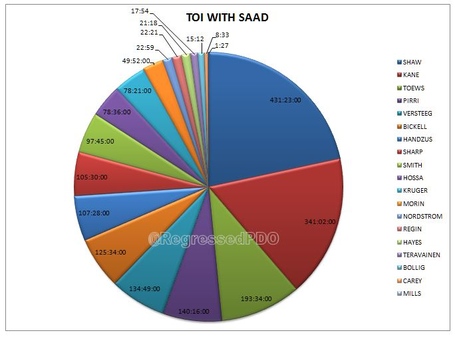 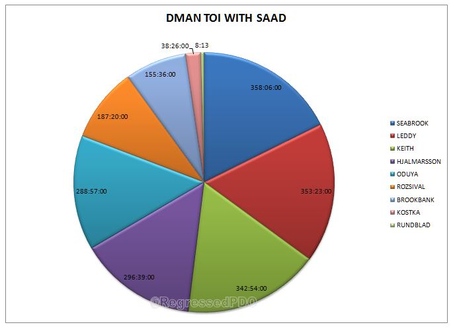 Here is a graph of Saad CF% at 5v5 Score Close for every regular season game. This is offset against his Zone Start Percentage Relative, which is just a way to see if he got more advantageous (i.e. more offensive zone) starts or less than his teammates for the particular game. I've highlighted the 50% (or positive) possession line in yellow. 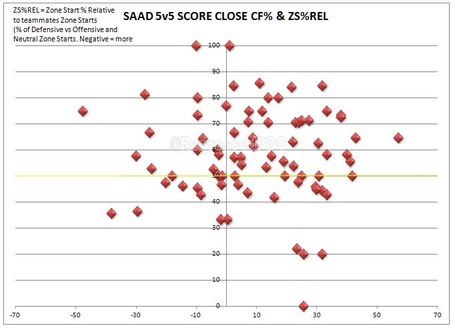 *5v5 Score Close among Forwards with 300 minutes or more TOI

I put together these WOWY charts so we can compare how Saad performed with his primary linemates last season and this season. 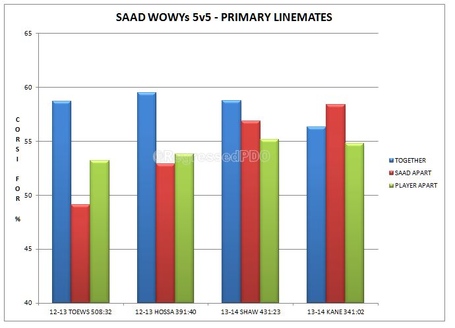 Last season when Saad was on a line with Toews and Hossa, the trio posted very impressive numbers together. Away from those linemates, keeping in mind that the sample size is very small, Saad did not have as impressive possession numbers. That changed this season. With Shaw and/or Kane, Saad and his linemates were well over 55% CF% at 5v5. Saad himself, with a more varied number of linemates away from Shaw and Kane was above this mark as well. Playing with Saad improved both Shaw and Kane's possession numbers. 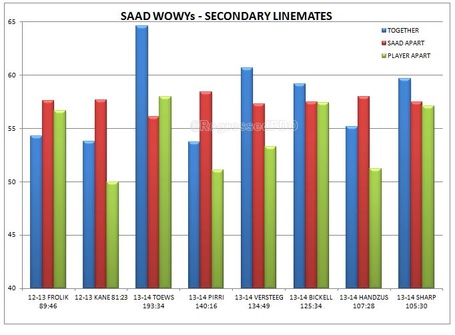 As we can see, last season Saad was with Michal Frolik and Kane when he was not on the Toews line. While their numbers together were well above the 50% mark, Saad still had higher possession numbers away from them. This season, we again see the big spike when Saad played with Toews, even to the point of increasing Toews' possession numbers. Playing with Saad improved the puck possession game of all of these various linemates including Brandon Pirri, Kris Versteeg, Bryan Bickell, Michal Handzus and Patrick Sharp. 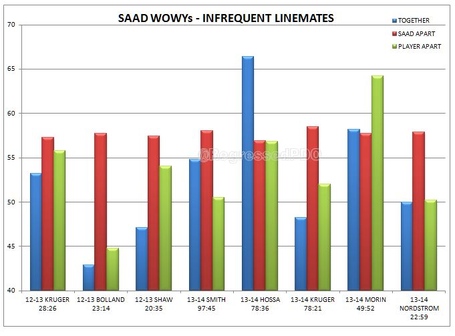 Saad was more infrequently on lines with the players in the chart above. The thing to keep in mind as we get into this chart is sample size and usage. We see from last season, that Saad played with Marcus Kruger, Dave Bolland and Andrew Shaw a little bit with mixed results. This season, Saad's time with Marcus Kruger and Ben Smith often meant taking on the checking line duties or being tasked to carry the offensive load with linemates not known for having a lot of offensive firepower. We again see that playing with Marian Hossa drastically improved the already impressive possession numbers for both players.

As an example of how these combinations affect each other, here is a chart from this season when Saad was with Toews and had either Hossa or Versteeg as the other wing. 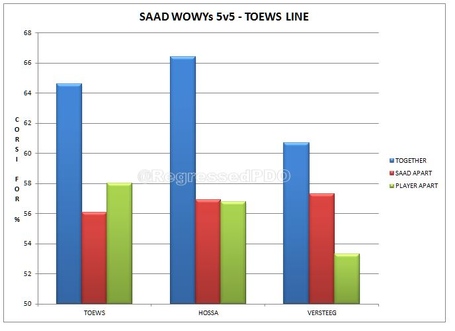 When with Toews and Hossa, the possession numbers for the trio are well above 64-66% at 5v5. When Hossa is removed and Versteeg is slotted in, those marks drop to just above 60%. This is still very impressive, but it illustrates the effects of having a playmaker versus a passenger at the other wing.

Below is a chart showing how Saad fared against the defensemen around the league he faced most often. Again, the sample size here is fairly small and the numbers are at 5v5 so there are Score Effects mixed in that may skew the numbers in either direction. For example, the Blackhawks got early leads on the Winnipeg Jets a few times early in games. The Jets then made an offensive push to try to score and the Blackhawks collapsed back into a defensive shell to "protect" their lead. This would make Saad's possession numbers lower in those games. The opposite may also inflate Saad's numbers if the Blackhawks got behind in the game and made an offensive push. Because of this (Score Effects), we prefer to use CF% at Score Close to remove that excessive noise in the numbers, but unfortunately, that data is not very easily collected. Just keep that in mind when reviewing these. 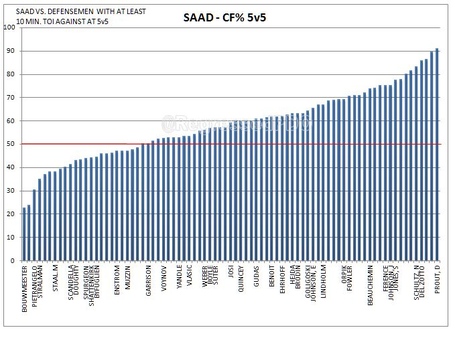 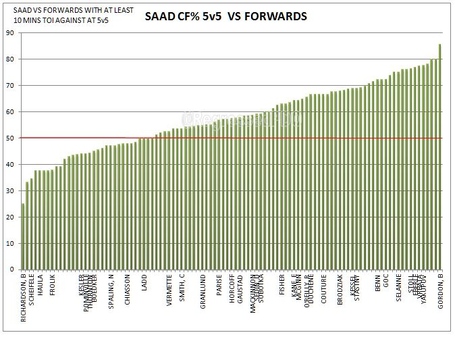 This chart shows how Saad fared against the forwards he faced most often during the season. The same sample size and Score Effects limitations apply here as well. Saad had over 30 minutes of ice time at 5v5 against Jamie McGinn (COL). He logged over 20 minutes of ice time against Ryan O'Reilly (COL), Shawn Horcoff (DAL), Zach Parise (MIN), Matt Duchene (COL), Mike Fisher (NSH), Nino Niederreiter (MIN), Valeri Nichushkin (DAL), Olli Jokinen (WPG), Nick Spaling (NSH), Maxime Talbot (COL) and Ryan Garbutt (DAL). All of the others shown on the chart had between 10 and 20 minutes of ice time against Saad. Saad posted his highest head to head possession mark against Boyd Gordon (EDM) and his lowest against Brad Richardson (VAN).

Here are some charts of how well Saad did at carrying the puck in and generating shots from his carry ins during the playoffs. 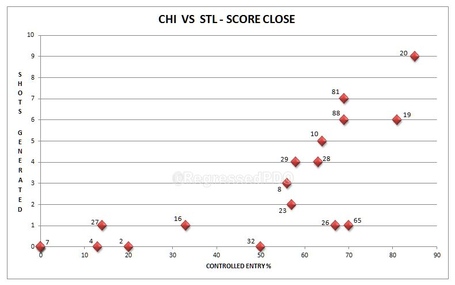 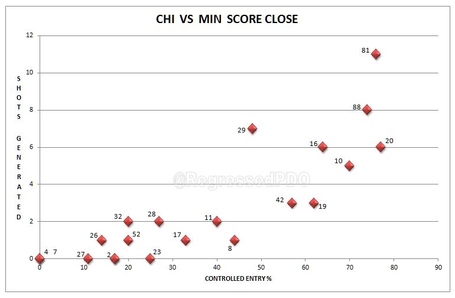 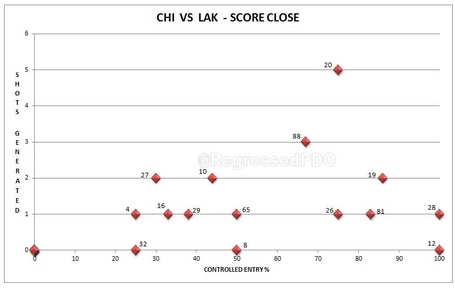 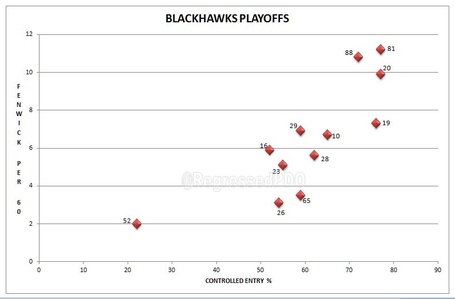 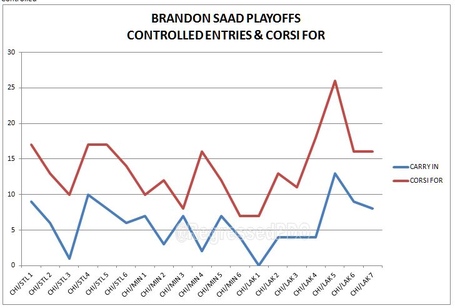 As you can see, I used the entry rates at Score Close for each series to give a more accurate picture of how Saad performed under the pressure of a close game. The overall graph indicates all 5v5 play during the playoffs. The graph of Saad's controlled entries and Corsi For by game is a terrific demonstration of his ability to create offensive chances.

Overall, Saad's second full season in the NHL was a very good one. He caught the eye of many hockey analysts during the regular season and the playoffs for his strong play, as evidenced in Dimitri Filipovic's article about Western Conference Forwards for the Sporting News here. With an opportunity to play on the second line with Brad Richards and Patrick Kane this coming season, look for Saad to continue to grow his game even further.

and through the tracking of Jen LC (@RegressedPDO on Twitter)