A Great Day In Blackhawks History

Share All sharing options for: A Great Day In Blackhawks History

Today, the Chicago Blackhawks announced that superstars Jonathan Toews and Patrick Kane have agreed to new contract extensions. Each player will get $10.5 Million per year for 8 years. 8 years is the maximum term of a contract under the new CBA when a player signs an extension with his current team. The extensions will take effect next season, 2015-2016. Both players will make $6.5 Million this season, the final year of their current deals.

Hopefully most people met this news with the joy it deserves, but I'm sure there are differing opinions. Feel free to slug it out in the comments section.

Here's a screen clipping of the Blackhawks attendance over the past few years that may be a bit illuminating. (from www.hockeydb.com) 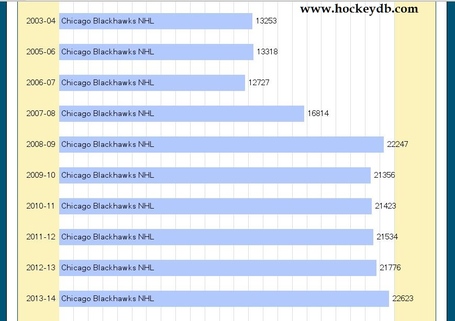