Marian Hossa playing as long as Jaromir Jagr would be unbelievable. He can do it.

If anyone can keep playing into their 40s, it's Marian Hossa.

Share All sharing options for: Marian Hossa playing as long as Jaromir Jagr would be unbelievable. He can do it.

Six years ago, Marian Hossa was just starting his career with the Chicago Blackhawks. He was an in-his-prime superstar joining a hungry team on the rise. He was trying to prove that he could be a champion after falling short many times. So when you hear the legendary 36-year-old winger talk about playing as long as 43-year-old Jaromir Jagr, it's worth considering how much can happen in six years.

Hossa's been around hockey as long as many fans can remember, and like Jagr, he's become one of the sport's active-playing elders. Few players in the NHL maintain their effectiveness well into their 30s, and as Hossa begins a 2015-16 season that will see him turn 37 in January, he's already among the oldest players still making an impact on the ice.

And yet, everywhere you go, people talk about Hossa being nowhere near finished.

"Hoss just keeps going," Bryan Bickell said to the Chicago Sun-Times' Mark Lazerus on Sunday. "He still looks like he’s 25, and it’s because of how hard he works and prepares himself. I’ve been sitting beside him for the last five years, and I look up to him, what he does, how he does it, even though I’m almost 30. He’s a guy that plays 110 percent every night, to be ready for every game."

Hossa's teammates and fans know quite well that few players love the game as much as him. Everyone around the Slovak winger seems to agree: the only thing that'll stop Hossa will be his desire to move on and do something else. Right now, he can't see when he'll reach that point. The pierogi factory can wait.

"Put it this way," Hossa said. "Being on this team, it’s exciting. We’ve got lots of fun guys on our team, even just watching sitting on the bench. And it’s a good atmosphere. Maybe If I’m somewhere else, it wouldn’t be the same. But right now, I’m looking forward to it and I’m still having fun."

This is nothing new for Hossa. With one of the NHL's unique contracts, which runs until he's 42 years old, retiring before the completion of that deal would leave the Hawks with a salary cap recapture penalty. So there are often questions about just how long he'll be able to go since the team is incentivized to keep him chugging along at a solid cap rate of $5.275 million as long as he can (or at least until 2021). Right now, there's no end in sight.

The thing is, even for Hossa, we're talking about some some largely unknown territory.

There are amazing hockey players, who spend years in the NHL and make millions of dollars. And then there are the rare players like Jagr, who take the accomplishments of world-class athletes and exceed them in ways many of us can hardly imagine. In all seriousness, making an impact in the NHL at the age of 43 is a special thing to do. Only eight skaters have ever done it: Jagr, Teemu Selanne, Chris Chelios, Igor Larionov, Mark Messier, Gordie Howe, Tim Horton and Doug Harvey.

So when we talk about Hossa playing to the completion of his deal, or as long as Jagr, this would be something special. Playing in the NHL, not to mention all the international competitions, takes a serious toll on the body and mind. It takes a unique combination of circumstances for a player to go through decades of professional hockey unscathed enough to be 43 years old and think, "Hey, yeah, I can definitely keep up with these 22-year-olds." We're talking guys literally half their age.

And yet some athletes avoid the injuries, maintain a passion for the game and find the reasons to stick around. Hossa seems to have found his by partnering with once-in-a-generation players like Jonathan Toews under a great coach in Joel Quenneville. "I think he loves being around the guys," Toews said to Lazerus. "He loves the game. He loves coming to the rink. I think that’s the No. 1 driving force for his success at this stage of his career. When you’re in a great group like this, I don’t think it ever gets old."

Being able to add to his increasing stockpile of Stanley Cup rings probably doesn't hurt, either.

The signs of optimism

As rare as anyone playing into their 40s is, Hossa appears to be uniquely equipped to pull off the feat. Not only is everyone around the Hawks praising his fitness entering the season -- with Quenneville saying he's skating as well as ever -- but the impact has been apparent on the ice, too. Through three games, the first line still hasn't found its footing, but Hossa has managed two assists and 10 shots on goal. 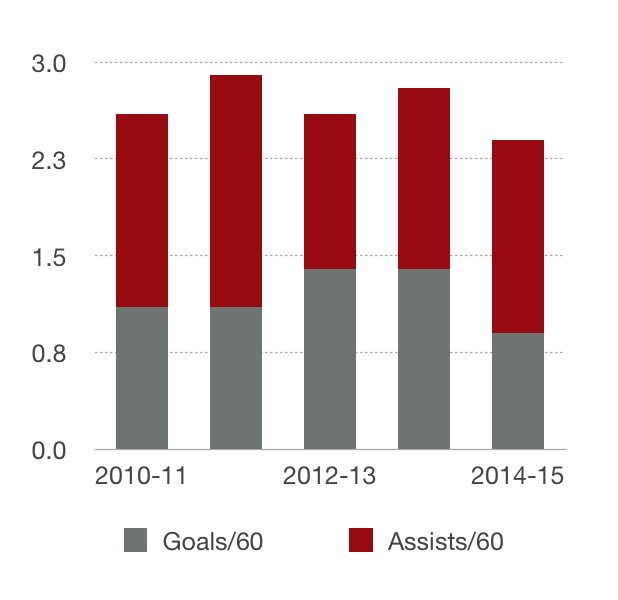 This is coming off a season where Hossa didn't miss a single contest, playing all 82 regular-season games and 23 playoff games as the Hawks won the Cup. In recent years, he's been healthy and effective, settling into a 60-point range each season while playing his usual brand of fantastic defense.

Hossa's always been a backchecking master, and even now, younger forwards best beware being too lackadaisical with the puck whenever he's on the ice. His point production per 60 minutes has been remarkably consistent over the past five seasons, too (see image to the right). There's room for him to decline and still be a quality player.

So what you really have here, like with Jagr, is the perfect storm of circumstances that could lead to Hossa playing into his 40s. It's the right player, the right team and the right contract, which pretty much never comes along. Even if you look at other players who are still doing their thing in the NHL, most of them have red flags that make it harder to see matching Jagr's longevity.

There are other talented players in their mid-to-late 30s still rocking it in the NHL. Shane Doan and Dan Boyle are 39 years old. Jarome Iginla is 38. Pavel Datsyuk and Andrei Markov are 37. Bump down to the 36-year-olds, and you have Hossa ('til January), Joe Thornton, Patrick Marleau, Brian Campbell and Chris Kunitz. The Sedin brothers and Henrik Zetterberg recently turned 35. So it's not like Hossa is going alone in his quest to play NHL hockey as long as possible.

But consider each of those players' situations. Doan is the last vestige of an old generation on a rebuilding Coyotes team that won't have much use for him soon. Iginla's trying to win a Cup before he retires on a team with essentially no chance. Datsyuk is having trouble staying healthy. Your best bets might actually be the two well-known Western Conference duos: Thornton-Marleau in San Jose and the Sedins in Vancouver. All four players have managed to stay healthy and effective against tough competition.

None of them have the unique contractual status that Hossa has, though. The Blackhawks have a direct incentive to keep Hossa motivated and playing because his retirement would leave them with dead cap space. Thornton and Marleau's deals expire in 2017 and the Sedins' in 2018. Who knows how far into the future those teams will want to keep committing to older players as they try to transition and stay competitive.

Nobody is going to have someone on their side telling them to keep playing in a way that mirrors the Hawks' relationship with Hossa.

To almost any player, sticking around as long as Jagr is unheard of. A 10-year career in the NHL should be considered a raging success. Hossa, meanwhile, would be lacing up for his 23rd NHL season if he makes it until the end of his deal with Chicago. Toss in a few years playing in his native Slovakia, and we're at 26 years of pro hockey in a 43-year-old man's life. Maybe more than the hundreds of goals, 1000-plus points and three Stanley Cups, that would be a sign of just what a special player Hossa is. That we can even consider Hossa being good enough to keep playing that long says a lot about what he's done so far. Indeed, he's nowhere near finished yet.

And now I leave you with this #HossaEverlasting: