Trevor van Riemsdyk should be part of the Blackhawks' postseason lineup

Share All sharing options for: Trevor van Riemsdyk should be part of the Blackhawks' postseason lineup

On the podcast How Did This Get Made?, they have a section called "Second Opinions" where the hosts read Amazon reviews of movies that differ from their own evaluations. Usually it's done to poke fun at these genuine pleas of passion for seemingly unlovable stories, but it's also meant to show that, hey, there are two sides to every debate.

That's my excuse to bring up one of my favorite podcasts -- outside of ours, obviously!!! -- as well as some thoughts I have about the Blackhawks' defensive dilemma. Earlier this week, Robert Zeglinski wrote about how Chicago needs to start fashioning its playoff lineup. He also offered up his suggested lines, including this trio of pairings on the blue line:

... notice anyone missing? Indeed, Robert thinks the Hawks should bench Trevor van Riemsdyk for their playoff run. He's certainly not alone in that opinion. Here's why I happen to disagree.

TVR has become one of the more divisive players on Chicago. Last season around this time, it was Rozsival and Kimmo Timonen getting the brunt of the frustration. If only we had some younger players with legs under them, we thought. Now we do, and it's simply transitioned the angst from one place to another. There isn't a ton of confidence in TVR these days.

And much of that wariness makes sense. TVR has eight even-strength points in 71 games this season. His 5-on-5 Corsi relative is minus-2.9 percent. The 24-year-old has been thrust into a much larger role, playing nearly 20 minutes per game, and the results haven't been stellar. You can see why some fans might prefer the more conservative option of veterans like Rozsival and Ehrhoff.

However, I think this misses a central point in TVR's season. When the defenseman has been paired with certain players, he's performed significantly better than with others. To me, the solution isn't to bury TVR in the press box. It's to shake up the current pairings so players are put in better positions to succeed. As much as we defer to Joel Quenneville when it comes to making difficult coaching decisions, this seems to be one area where Q's blender could have some tangible, positive effects.

First, here's 5-on-5 Corsi by pairing for the Hawks' most-used duos this season: 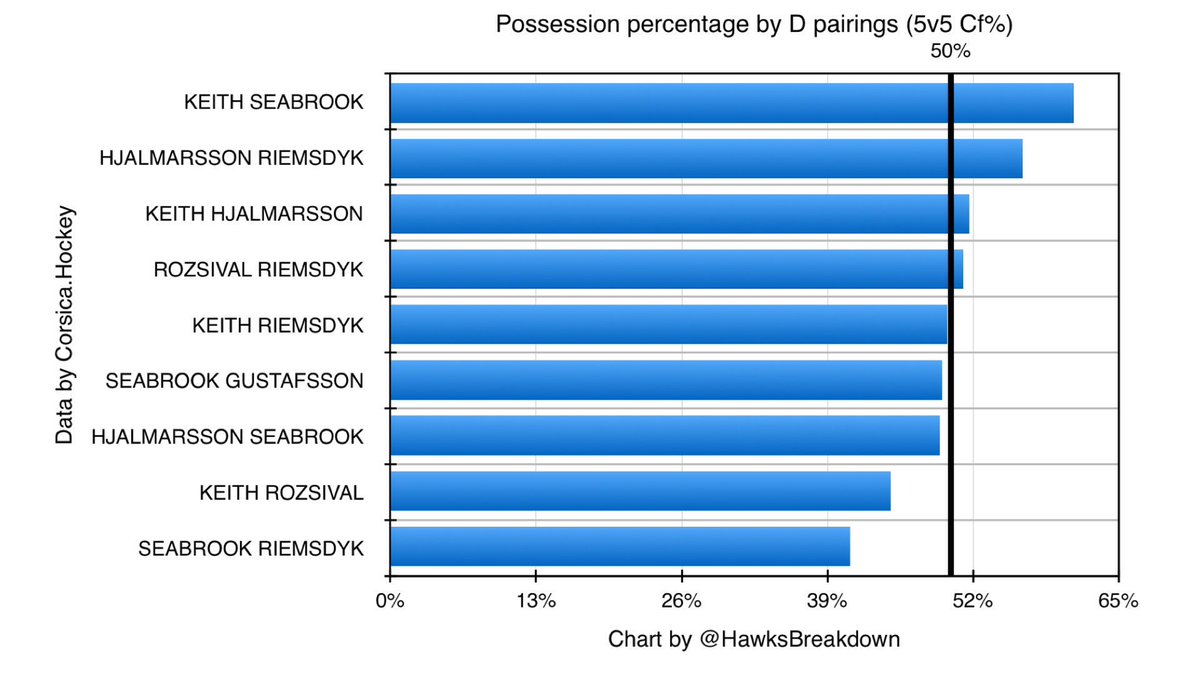 This seems to paint a pretty clear picture of how the Hawks' top two pairings should be aligned going forward. Seabrook needs be bumped back to the top duo with former longtime partner Keith. TVR, meanwhile, should be paired with Hjalmarsson, the defensive stalwart. Based on possession numbers -- where the Hawks have not-so-coincidentally been a mess lately -- that's the best foursome.

Now, maybe you're skeptical about whether Hjalmarsson and van Riemsdyk can actually be a lockdown defensive pairing. It's a fair concern. We've seen our fair share of instances where TVR was too aggressive in jumping into play offensively, leaving the team scrambling on the back end off a counter-attack. If Keith-Seabrook is a more offensive-minded duo, where does Chicago lean on defense?

Except it turns out that Hjalmarsson-TVR has been Chicago's best shot prevention duo this season, by far. 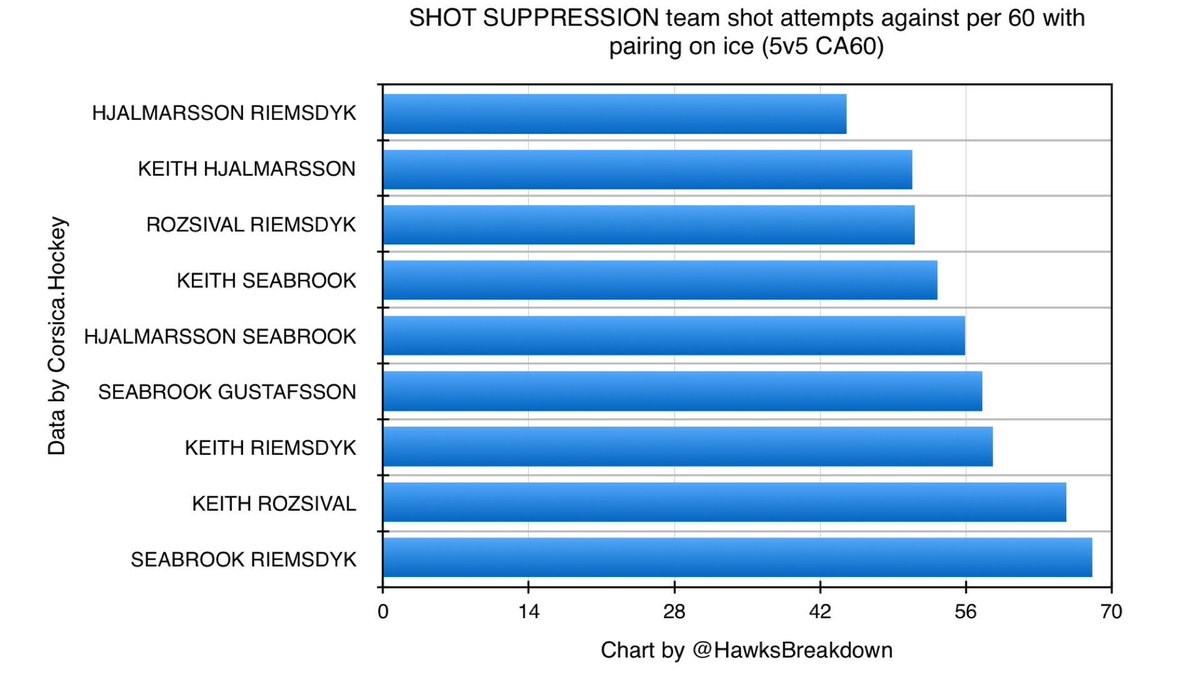 That Hjalmarsson-TVR pairing is also third in shots generated per 60 minutes, too, behind only Keith-Seabrook and Keith-TVR.

All of this tells me that TVR is at least one of the Hawks' top six defensemen going into the playoffs, and might even be the clear No. 4. While the overall numbers are worrisome, it seems apparent that the Hawks might get much better results if they'd just stick with some different groupings. These are admittedly small sample sizes for various pairings within a single season, but if the negative small samples on TVR were cause for concern, then these numbers should similarly be reason for hope. It also helps to explain why Quenneville keeps playing TVR in important situations.

It does beg the question of why TVR has seen so much time with Seabrook. And yes, it's unfortunate that our veteran defenseman who's about to start an eight-year, $56 million contract seemingly can't anchor his own pairing. Ideally, paying that much money for a defenseman, it shouldn't matter much who he's playing with. But with Seabs, it's becoming apparent that he does his best work next to Keith. Q has tried valiantly to split up Keith and Seabrook's offensive talents to give the team a more balanced attack. It's just not working, though.

So that's why I think the Hawks should roll Keith-Seabrook and Hjalmarsson-TVR as their top two pairings. Beyond that, figuring out how to rotate Ehrhoff, Gustafsson and Rozsival into the final pairing will be another challenge. But there might be some stability to be found on the top four, and based on the recent usage of these players, it seems clear TVR is settling in as the top guy behind the Big Three.

And assuming Q doesn't stubbornly stick with TVR-Seabrook, it might actually be okay. This kind of uncertainty isn't ideal for a Cup contender, but van Riemsdyk stands a better chance in the playoffs than you might think.